The Northern Elephant Seal is an extraordinary marine mammal. It spends eight to ten months a year in the open ocean, diving 1000 to 5000 feet deep for periods of fifteen minutes to two hours, and migrating thousands of miles, twice a year, to its land based rookery for birthing, breeding, molting and rest.

The Piedras Blancas rookery, on Highway 1 fifteen miles north of Cambria on the California Central Coast, is home to about 15,000 animals. The area is open for viewing every day of the year and there is no admission fee or reservation required. 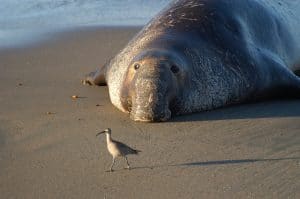 Breeding Season
November: Mature males begin returning at the end of January December: Males continue to return; females begin to arrive mid-month. The first births are usually around Christmas.
January: Females continue to arrive and give birth, the peak of births occurs in the last half of the month. The first females to give birth, mate, wean their pups, and leave.
February: Births continue. The peak of mating is around Valentine’s Day. More females leave.
March: Last adults leave. The weaned pups teach themselves how to swim. 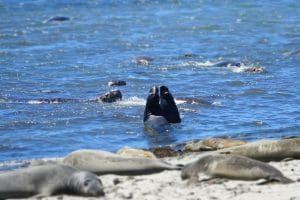 Fall Hall-Out
September – November: Young-of-the-year, juveniles, and subadults too young to take part in the breeding season haul-out to rest. Younger animals tend to haul out first. As seals approach sexual maturity their haul-out time more closely coincides with that of the breeding animals.

Previous Next
Close
Test Caption
Test Description goes like this